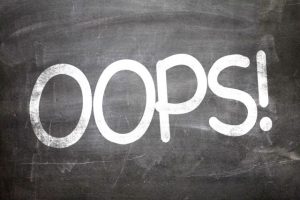 You know how we talk a big game? We’re going to do a thing and no matter what, we’re going to reach a goal? We say we’ll write a certain number of words every day without fail or we’ll only check our social media accounts three times a day instead of twenty?

Well, remember last week when I said I would never slack on meeting my daily word count goal because if I did it once, the whole plan would fail?

I guess my subconscious viewed that statement as a challenge.

That very day, Thursday, I came in about 700 words short. The writing was getting tough. The words weren’t flowing as quickly as they had when I first started my plan. And I was getting tired. So, I made the conscious decision to forego a winning 14-day streak. I’m bummed I can’t claim that awesome virtual trophy.

But remember I also said if I slacked off, I wouldn’t be able to catch up?

A minor hiccup doesn’t have to mean we fail the whole thing. But we better solidify our determination the next day.

And then last night, well, it was Super Bowl Sunday. I decided that since we have this awesome TV and unlimited internet, I might as well do something I’ve never done before and actually turn on the game. You know, to catch the commercials and the halftime show.

It wasn’t the appalling commercials or the equally appalling halftime show that caused me to barely get any writing done. It was the damn LG TV that kept shutting down the web browser app due to memory.

I bet you understand what I’m talking about. Whenever the cable box or the wireless router shuts down, we’re so focused on getting it back on that we’ll set our work aside and do anything to fix it. But sometimes there’s absolutely nothing you can do and you just have to wait it out.

I haven’t had much issue with the internet since we got back on Comcast. It seems to work beautifully. But many years ago, the router (or maybe just the internet service) would shut down all the time. It got to the point where I decided whenever the internet goes down, it’s God’s way of telling me to get back to work.

I don’t need the internet to write. In fact, I have to keep devices out of my sight so I don’t constantly think about them and touch them.

So, finally, after the web browser shut off for the fourth time (or was it the fifth?) and after the halftime show was over, I said, ‘Screw it,’ and turned on Netflix.

I realize I should have turned the TV off altogether. But you know, I pushed a few easy buttons and seconds later, My Girl was staring me right in the face. I haven’t seen that movie in ages. So, I thought I’d watch it while I write. Bad idea.

Enter Day 2 of not meeting my daily word count.

Okay, to be fair, I did shut off the TV before the movie was even half over so I could focus on my writing again. But it just wasn’t happening. The writing… So, I closed out the day about 1,100 words short. Oops.

I’m not totally bummed though, because…

I’m almost done with the book!

And I plan to plow through to the end TODAY!

Had I not come up with this insane plan two weeks ago, I would probably still be floundering around the mid-point of my novel. And I’d be lucky to release it to the world by the end of March. That timeline was not going to work for me.

So, while I didn’t smash my goal, I still came out ahead. And to me, that’s a huge success!

It’s amazing what getting focused will do.

So, starting tomorrow, I’m giving myself a break week which will include working through edits for No Way Out as well as writing for the next book in the series (and some other projects, too).