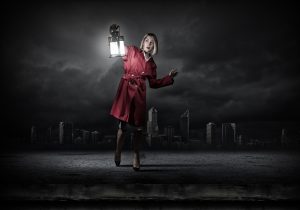 Did you know that an estimated 11 percent of the U.S. population is afraid of the dark? And according to the Mirror, 22 percent of the British population has confessed they don’t like to poke their foot out from underneath the covers in case something grabs it?

nyctophobia – a fear of the dark

Here’s what Wikipedia wrote about it: “Nyctophobia produces symptoms beyond the normal instinctive parameters, such as breathlessness, excessive sweating, nausea, dry mouth, feeling sick, shaking, heart palpitations, inability to speak or think clearly or sensation of detachment from reality and death.”

My earliest memory of being afraid of the dark was when I was about four years old. For some reason, I had it in my head that, at night, there were snakes covering my bedroom floor (likely a suggestion I picked up somewhere – I’m pretty sure I hadn’t seen Indiana Jones yet by that age though).

Within a few years, I had picked up the intense feeling of someone standing beside my bed with a needle ready to poke me with it (probably thanks to years of sleep studies at the children’s hospital). Over the years, that made-up image changed to just a single indistinguishable person.

Add a few psychopaths and serial killers from movies and now any time I can’t see my hands or feet, I start to freak out (thanks to Arachnophobia and Jaws). No way am I sticking my hand up under that lamp shade or letting my feet dangle in the water.

In most cases, it’s clearly an irrational fear.

I grew up in Minnesota. And I’m holding onto the belief that there are no sharks in the lakes up there (no large reptiles either). There were also no known venomous spiders where I lived – those could be found farther south.

But the sensation can be intense. So intense that the only way to get from one room to the other is by lighting up the path. But not just to the front. If I can’t see behind me, forget it.

I’m much more sensible now. I can usually talk myself out of that irrational sensation. And having a guard dog helps. But I also don’t go out of my way to make things difficult. I turn the lights on and off as I go.

Most of the tough situations I’ve written about in my novels have been purely from my imagination. I draw on observations or others’ personal accounts for ideas as well as emotionalize each situation in order to get deep into a scene. I have to ask myself: how does the character react? What does he say? How does he feel?

But when I wrote about Dana’s fear of the dark in Redeemed, the second book in The Hexon Code series, I drew on my own personal experience. I can honestly say, it was the first time that irrational fear did me a favor. It allowed me to write about something I knew well. 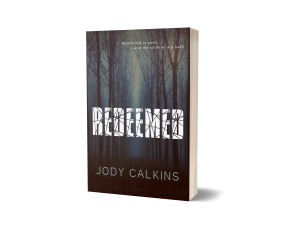 That’s the thing about life though. It gives us experiences that allow us to turn them into something useful. Whether we’re storytellers or how-to experts, we can use our experiences to tell stories that benefit others in some small way.

It also helps to know that we are not alone. We are never alone (well, um, unless we’re standing in the dark by ourselves…*nervous laugh*).