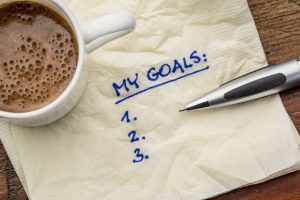 Last week I wrote about unfollowing people on social media (it’s been great, by the way!). So, I thought I’d write about goals and productivity today.

So many of us use the time excuse. I don’t have time to do that. I’m too busy. I couldn’t possibly add anything more to my schedule. We get so caught up in making excuses that we start settling for a life that doesn’t include the seemingly random thing we want to do.

If it’s not a time excuse, then it’s some other excuse. Oh, I could never do that. I don’t even know where to start. I’m too old to start now.

And then if we do start it, we don’t stick with it for long. It feels weird. It’s too different. I can’t seem to do it or get into the groove of it.

So many excuses flood our day. And we let them tell us what we can and cannot do.

And that’s odd. Because we’re a society that doesn’t take crap from nobody. Ain’t nobody gonna tell me what to do. Am I right?

I think we give up our freedom because it’s easier. It’s too much of a hassle to fight for the things we actually want. Whatever that thing is, we don’t want to work too hard at it. Or maybe we do, but then we don’t. Because when it really comes down to it, we’re not actually willing to work that hard.

So, at the same time, while we’re saying we live our own lives, we also give up our freedom to stupid stuff. We let a binge on Netflix stop us from spending those measly fifteen minutes working toward something we actually want. We give up our time to things we don’t want to give our time to, and that results in us saying we’re too busy or tired to focus on progress toward a goal.

And then when we do work toward a goal and it doesn’t feel natural right away or it gets hard after Day 1 or 2, we give it up. And poof! Just like that, we gave away our freedom to something easier.

If everyone was productive and worked toward their goals, we wouldn’t need hundreds of books and videos on the topic. It’s clearly a widespread issue.

But that doesn’t mean it has to stay an issue. If we want to achieve something, we need to break out of the comfort zone of lack and laziness (yep, I said it).

And part of that is giving up on things we don’t actually need, like following everyone’s drama on Facebook. We don’t need it. But what we do need is fulfillment. And we can achieve that by setting goals and working toward them.