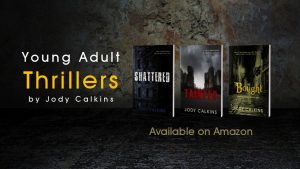 My Books in Chronological Order

Welcome to my story world where assumptions, preconceived notions, and morals are challenged. You’ll meet characters with questionable actions, a good heart, and a strong resolve to set things right no matter the risk.

The stories below follow a wide timeline, from 2080 to 2118. I’m working diligently to fill in the timeline. Shattered, Tainted, Platform 273, and Bought can be read in any order as story world connections are not apparent at this time. Their worlds will collide mid next year!

In the meantime, for a chronological read, enjoy the *published* titles in the following order:

2080: Shattered – an edge-of-your-seat young adult ghost suspense thriller about a teen girl who learns the chilling truth about the orphanage in which she lives and seeks justice for the death of someone she loves.

2113: Tainted – an unputdownable young adult dystopian thriller about a teen girl’s dangerous quest to escape her walled city after wolves and bombs tear it apart.

2116: Platform 273 – a young adult dystopian novel about a teen girl who will do anything to avoid being forced into an arranged marriage for the sole purpose of regrowing her city’s population. Even if it means risking her life to do it.

2118: Bought – a young adult dystopian thriller about a teen girl who must create the antidote that will save the villagers from the government’s evil plan and the boy who will do anything to melt her cold heart.

2118: Charged – Fira Moseley is back in this deeply emotional sequel to Bought, charged with a crime against the NRC, harshly punished, and left broken. Will she overcome new fears and setbacks at a time when her skills are needed most?