A Preview of Tainted – YA Dystopian Thriller Giveaway! 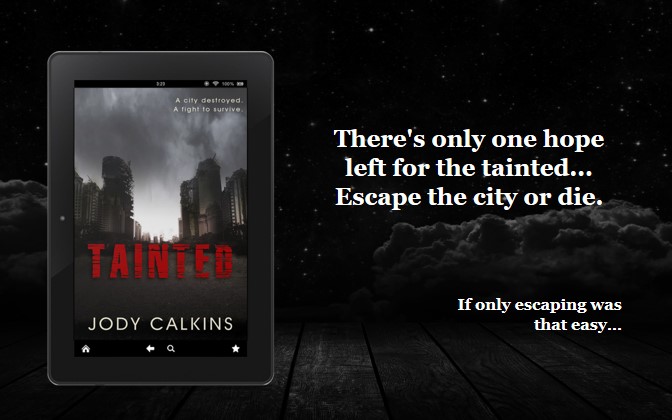 If you’re ready for a thrilling and dangerous adventure story, check out this preview of Tainted, my young adult dystopian thriller. You’ll get to read the first nine chapters (!) of my new YA series.

Tainted is the story of a girl whose family, along with the majority of the city’s population, is presumed dead after genetically modified wolves breach the wall and attack the people. In her darkest moment, when she’s decided to give up, a mysterious young man drags her out of her home and gets her to safety. Only that sense of safety is short-lived when the officials start bombing the city. Now they have no choice but to escape or die.

Here is the first chapter to get you started…

WHEN EVERYONE DIED around me, it seemed the world had crumbled. What had been was gone, and most of what remained was little more than rubble, knocked down by the bombs that had torn our city apart and left to disintegrate in the scorching sun.

A little over a week ago, the city’s thick stone walls were breached, and one hundred wolves, which were merely a scientist’s pet project, flooded into the city. When the city officials heard the news, they abandoned their post, fled, and blockaded the breach in the wall, trapping us inside the city as the wolves roamed free.

One would think there was nothing to worry about. What could one hundred wolves accomplish in one night? But these weren’t just any wolves. They could regenerate.

Yes, this brilliant scientist had discovered a way to mutate a wolf’s DNA so that its body could regenerate damaged flesh. Like when a starfish regenerates a severed limb. They were impossible to kill. And as far as I knew, none had died in the attack.

Unfortunately, the same couldn’t be said for the people. Since it was a Saturday night when the wall was breached, a large amount of the population was at the heart of the city for weekly entertainment. Generally, only a handful of people ever stayed home on Saturdays.

When I heard the announcement on the ten o’clock news, the death toll had already reached an estimated 40,000 which was almost half our city’s population.

That was the last news report.

Five minutes later, our electricity went out and never came back on. And by then, it was too late to evacuate.

I clutched my little sister tighter against my chest as we huddled inside our bedroom closet, wedged between a dresser and a side wall. I couldn’t tell if it was my body or hers that trembled, but I kept shushing in her ear anyway like any big sister would.

“When are they coming back?”

“They’ll be back soon.” I lied. I knew our parents weren’t coming back. When they heard the screams, they locked us inside the closet and went outside to help. But I had seen the news report. The odds were slim to none that they’d return.

I chewed at my chapped lips and recoiled at the taste of salt. I wasn’t sure how long we were supposed to stay inside the closet. When would it be safe to leave? At some point, we’d have to get out to relieve ourselves or to go find food and water. But where would we go after that?

With our parents surely dead, I was left to look after my five-year-old sister Dannie. I was only sixteen, barely old enough to take care of myself. And I didn’t know how I’d keep us alive.

But as we huddled in the closet, my father’s words played over and over in my head: Whatever you do, Charlotte, take care of your sister…and stay alive.

I kind of figured staying alive was a prerequisite for taking care of Dannie, but for whatever reason, my father felt the need to emphasize it, and at the time I was too busy panicking to correct him.

Then they had embraced us one last time before rushing out the door and into the night.

Not sure if you’re a fan of young adult novels? Check out the sample and find out. There’s nothing to lose…because it’s free!