A Look Inside the Story Idea for BOUGHT – My YA Dystopian Thriller Series (Plus an Excerpt!)

When the idea for BOUGHT, my latest young adult dystopian thriller, came to me last summer, I was torn. Did I really want to write a book about abortion? My what-if was, what if the government was raising an army of unwanted children whose mothers were imprisoned for attempting abortion?

In Fira Moseley’s world, mothers who attempt an abortion are charged with attempted murder and serve a life sentence in federal prison. Fira, an “unwanted child,” is a ward of the state and her mother is serving a life sentence. From birth, she has lived in a fortified city created by the government and the Network for Recovered Children (the NRC) and she’s been taught to believe certain things about society.

Everyone knows abortion is a controversial topic. So, when the idea came up, I had my qualms. But when a story idea strikes and it stays in your head, there’s only one thing to do: write it.

But the deeper I got into the story, the less it became about the topic of abortion and the more it became about Fira’s life. She’s an intelligent, strong-willed, and confident young woman. Her whole being is striving to do her best work so she can provide the most value to society.

That means she gives 110% when it comes to her studies and her new career as a biochemical researcher. Love has no place in her life. Because the NRC frowns upon romance and friendship, and even reprimands citizens who engage in such matters, Fira’s not interested in getting involved with anyone or forming any kind of relationship. There is an innocence about her. She speaks truth and she’s not afraid to speak her mind.

While the NRC children are given the best that life has to offer, the people in the village are suffering. They live in the slums. Life is hard. And every year, life for the villagers gets harder. The villagers are treated like criminals, like scum. And they’ve had enough. Something needs to change before it’s too late.

When the villagers start their revolt, they need people on the inside. People who can be their eyes and ears and keep them informed about what the government and the NRC are planning. An unnamed individual suggests Fira for the job, so the leaders of the revolt send one of their own to convince her to join their side.

Now, armed with new information and the truth about what the NRC has done to the villagers, Fira joins their cause… but at great risk, because assisting the villagers in any way is a crime against the NRC. Punishment is severe, and if she’s caught, there’s no telling what will happen.

She thinks she has everything figured out, but then Devon, her instructor at the research center, turns her life upside down and teaches her the true meaning of life.

Devon is patience personified, he has a firm grasp on self-control, and his love for Fira is so touching. But he has secrets he’s not willing, or ready, to share. Secrets that, once revealed, explain a lot about Fira’s life.

I love Fira and Devon’s story so much that I’ve turned it into a series. So far, I have four books planned for the BOUGHT series, and I’m considering ideas to extend the series beyond that. Some difficult, life-changing events are in store for Fira and Devon, starting in Book 1. 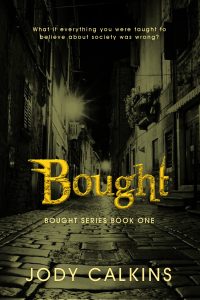 Here is a short excerpt from BOUGHT…

My stomach twisted into knots as I stepped my way down the center aisle and walked past part of the front row. Before I made it up the steps of the stage, the mayor called for an applause.

While the auditorium filled with thunderous clapping, I exchanged a quick nervous look with one of the girls in the front row and nearly tripped going up the stairs.

In front of two hundred of my peers.

I hurried across the short distance to stand beside the girl whose name had been called before mine.

“Thank you all for coming up on stage,” Mayor Wilson said, outstretching his arm toward us. “Like I said, I promise this will be painless. But first, let’s introduce them, shall we?”

He pulled the microphone from its stand on the podium and then walked up to the first person in line, one of the boys at the top of our class. As he went through the introductions, I zoned out, focusing on the door at the side of the room. Another shadow had gone past the door.

I jerked my head in the direction of the sound and saw Mayor Wilson standing near me, staring down at me. I quickly cleared my throat and said, “Sorry?”

He flashed the crowd a conspiratorial grin and then turned back to me. He leaned in slightly. “Ms. Moseley, I was just introducing you to the crowd. Are you all right?”

He gave me a funny look and then stepped away back toward the podium. I caught the girl standing to my right looking at me strangely, too. I gave her a questioning look, but she turned her attention back to the audience.

As I glanced out toward the crowd, I saw movement inside the director’s box toward the top of the back wall. Inside the boxed room, a woman stood looking down at us with her arms crossed over her chest. Then behind me, a man carrying folding chairs walked across the wood floor from backstage. He set them down, unfolding each one and motioning for us to take one.

“Go ahead and form a loose arc so you can all face the audience,” the mayor said.

I slid my chair over next to the girl’s.

“Great. Now have a seat. We’re going to play a fun little game.”

I lowered myself onto my chair and tried not to stare with my jaw dropped as the same man wheeled a small cart, carrying some kind of machine with a mess of plastic-coated wires, across the floor toward us. He stopped alongside the first contestant and folded his hands over his protruding belly.

Mayor Wilson gestured toward the man and said, “This man here is Roscoe Adams. He’s our Director of Internal Affairs, and he handles the management of citizen loyalty. As you might expect, anyone under suspicion of treason will spend several long hours with Mr. Adams to ensure he has our community’s best interest at heart.” He turned to Mr. Adams and said, “Director, would you please explain in more detail what it is you do?”

The director nodded as he stepped forward behind the podium. He leaned toward the microphone and addressed the audience. “As the mayor was saying, I ensure that all citizens are working toward the greater good of the community. Occasionally, my office staff receives anonymous tips regarding suspicious behavior. The suspected individual is immediately brought to my office for questioning. In order to ensure that the individual is speaking honestly and openly, I administer a lie detector test.

“As some of you may already know, the lie detector test was enhanced two years ago when one of our talented graduates discovered a more effective method of returning an accurate result. In addition to monitoring a subject’s heart rate, the machine now reads changes in internal and external body temperature, eye movement, and air flow.”

I felt myself groaning inwardly as he spoke. Just thinking about the implications of working with Jax was starting to make my head spin and tighten the knot in my stomach even more.

“For instance, if a subject intakes a sudden breath, especially upon receiving a question, the machine catches it and makes a note on the digital readout. If the subject closes his eyes for any length of time, other than standard blinking of course, the machine will catch it. These physiological responses to questioning have been studied thoroughly and tendencies in relation to lying have been determined.” He rubbed his hands together as he turned toward us. “Now, let’s test our subjects.”

I felt my palms start to sweat and I resisted the urge to wipe them on my pants. Casting a glance at the audience, I caught my new instructor watching me from the front row. He held my gaze as he leaned toward Hezekiah O’Connell who was sitting next to him. His lips moved but I couldn’t tell what he was saying. Then Hezekiah nodded briefly as he pulled a laptop from a bag and opened the screen.

I swallowed the lump in my throat and forced myself to turn my attention back to the mayor and tried to ignore Devon’s eyes on me.

“Yes,” the mayor said. “And let us assure our brave subjects that this is merely for fun. I don’t want any of you to think we believe you’re involved in any wrongdoing by calling you down here this morning.”

The other four test subjects nodded so I followed suit and tried my best at a lighthearted smile.

Mr. Adams started applying the electrodes to the first boy’s arms and face. “Normally, we shave the head for this process, but since we’re just doing it for fun, we’ll skip that part.” He glanced over at me and the girl sitting to my right and winked.

Once he was done applying the electrodes, he returned to his cart and typed on the machine’s small keyboard.

“Let’s begin,” he said, rubbing his hands together again as he glanced at the audience. He turned to the boy with the wires. “Simply say yes or no to the following questions. Do you understand?”

Mr. Adams studied the screen and then said, “Very good. Is your name Roscoe Adams?”

“Was your primary area of study this past year Law and Reasoning?”

“Have you ever cheated on a test?”

Mr. Adams narrowed his eyes at the screen and said, “Hmm. We’ll overlook that one.”

The audience laughed. By now the boy’s face was bright red.

“Now for the fun question. Have you ever, in the past year, peeked inside the girls’ locker room?”

I felt my jaw drop as I stared at Mr. Adams.

“No, of course not,” the boy replied.

The director chuckled as he cast a comedic look at the audience. “Admissible. Thank you, Mr. Jeffrey Johnson, for being such a good sport.”

Jeffrey heaved a sigh of what looked like relief while Mr. Adams walked around the cart and began removing the electrodes.

“Give the young man a grand applause,” he said as he pulled the boy to his feet. “Now, let’s see how well our next test subject responds.”

Before Mr. Adams could get the electrodes attached to his next victim, a loud pulsing buzz came over the loudspeakers.

And then an automated female voice spoke. “May I have your attention, please. This is an emergency evacuation. Please make your way to the nearest exit and return to your living quarters until further notice. I repeat, please…”

BOUGHT is available in Kindle and paperback versions on Amazon. Go here to check it out! – https://www.amazon.com/author/jodycalkins