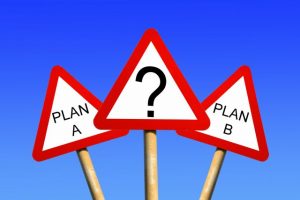 The road is paved with good intentions…

I think adjustments are in order. Maybe I was a bit too ambitious with my plan. It sounded great in theory. Maybe a little nuts, but overall a great plan.

So, I’m still going through edits on my novel and I’m not quite sure who to blame. Okay, just kidding. It’s totally me, and maybe my muse for holding out on me during the draft phase.

I’ve added about 8,000 words over the last few days for the scenes I had skipped over in the first draft. It’s coming together and I’m happy about the words. Getting a little frustrated that it’s taking longer than I had initially allowed.

So it took a little longer. Big deal. At least it’s getting done. Without my insane plan, I’d probably be releasing this new book in April (we’re still in February). So, we’re making big progress.

Now that I’m almost done with No Way Out, I’m starting to consider my plan for the next book in the series – Breakout. I have about 55,000 words to write because…NEWSFLASH…I haven’t had a chance to work on writing this whole time I’ve been editing.

Should I keep it to a 14-day plan? Or should I allow myself more time?

I’m not sure. I want it released in mid-March, so that allows a max of four weeks. But the book after this one hasn’t been written yet. Not even a little bit. That means I’d be writing 75,000 words. And if I want that one released in mid-April, I need to get a move on.

But at the same time, a person can only do so much.

Or is that an excuse created by lazy people?

Again, not sure. But if I don’t have a concrete plan, it’ll just end up taking longer. Just about any project is like that. It’ll take as much time as we allow.

We can push ourselves harder and be more productive. And eventually that hard work we never thought we could do starts to become the easy work that we can do in our sleep (in the figurative sense).

There’s no way to know just how much we can accomplish or achieve if we’re never pushing ourselves.

There is a time for self care and relaxation. An important time.

But if I’m being truly honest, it’s hard to think I deserve that time when I know I could be doing more. If I’m taking it easy and working on a stress-free life (you know, writing when I feel like it, not getting bent out of shape about the words, being at peace with my progress), I feel unproductive. And then I feel like I didn’t deserve all that wonderful relaxation time. It’s like I cheated and skipped to the reward before I actually finished the work.

Good progress takes hard work. There are ways to work smarter, of course, but if we want to see a ton of progress, we need to keep pushing ourselves harder.

That’s my thought anyway. Now back to my edits…